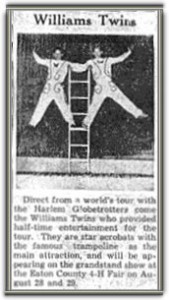 A company with a proud history, rooted in family values, committed to producing the best in entertainment, Thrill Show Productions Inc. is truly a Canadian treasure.
Walter Williams & his brother, the late Bill Williams are Canada’s original motor sports entertainers, however for them entertaining people began long before they climbed into a vehicle!

In their early years, Walter and Bill played the violin, accordion, and piano. They added to their talents with gymnastic tumbling and acrobatic roller skating. Not merely content to ‘perform’ in front of each other, the twin brothers decided they would rather ‘thrill’ larger audiences. What better way to ‘thrill’ audiences than to perform on a trampoline…balanced on a single pole…50 feet in the air! This renowned, one-of-a-kind act became known as ‘The Magic Carpet’. Soon after perfecting this act, their touring life began opening for the world famous Harlem Globetrotters. This act would find them performing in the finest circuses and shows the world has ever seen. For Walter & Bill Williams this would be the beginning of a lifetime dedicated to entertaining.

Walter and Bill joined Jack Kochman’s “New York World’s Fair Hell Drivers”, performing over 3000 times during 1964-65! It was here that they perfected their superior auto stunt-work that we continue to see today in commercials, television and movies. This was also the beginning of what would become the premier motor sports entertainment company in Canada, Thrill Show Productions Inc..

By late 1965 Walter & Bill Williams had gained enough experience and expertise in the business of auto thrills, to create their own show, the ‘Trans-Canada Hell Drivers’. To this day, it is those standards, set in that original production that all other North American auto stunt shows are measured by. Walter put his talents on display with ramp-to-ramp leaps, reverse spins and precision driving while Bill thrilled audiences with his Canadian Championship style high skiis. Out of this show a legendary Canadian entertainment character was born, “Happy the Clown”. “Happy”, played by the late Bill Williams, brought live clowning entertainment to new heights with his crazy antics, perfect slapstick timing and of course “Happy’s Clown Car”.

As the sixties progressed and their reputation of ‘safety-first’ grew, the twins were contracted by the Ontario Ministry of Transportation to assist in the Ministry’s campaign to pass the first seatbelt legislation. Walter & Bill appeared in public service ads demonstrating life-like crashes to prove, “Seatbelts DO Save Lives”. 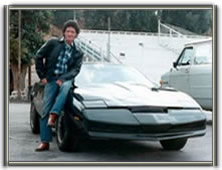 Within a few short years, Walter & Bill had become the respected and renowned experts in their field. Known for their skill, professionalism and dedication to safety, the Williams’ twins would now be called on by Hollywood producers. Motion Picture and Television appearances for the Williams’ twins included the Police Academy movies, Perry Mason, Knight Rider, and Thrill of a Lifetime. Commercials for Ford, Dodge and Chrysler also featured the Williams’ twins driving skills and would be seen around the world.

In the 1980’s, Canada’s #1 Stunt Team produced a series of very successful Automobile Stunt Shows that toured Canada, the United States, Panama, Mexico, and Australia. If you were at a fair or exhibition anywhere in North America during this time, you very likely saw one of these Thrill Show Production events; ‘Molson Motorsport Stunt Show’, the ‘Toyota Sport Stunt Team Show’ and the ‘Hollywood Stunt Show’. 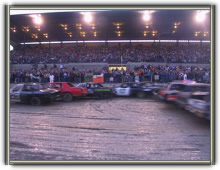 In 1991 Walter and Bill Williams were honoured with the Canadian Association of Fairs and Exhibition’s. “Industry Achievement Citation” recognizing their work entertaining audiences across Canada.

Thrill Show Productions Inc. continues to bring the best in motorsports entertainment to thousands of fans every year. Symbolizing best the reputation of Canada’s #1 Demolition Derby as the most successful demolition derby producer in Canada is the ‘WILLIAMS CUP Demolition Derby Championship’. Held annually during Thanksgiving Weekend at the Norfolk County Fair in Simcoe, Ontario, this event, the largest in the nation, attracts over 10,000 fans to watch the best drivers battle for more than $20,000 in cash & prizes! 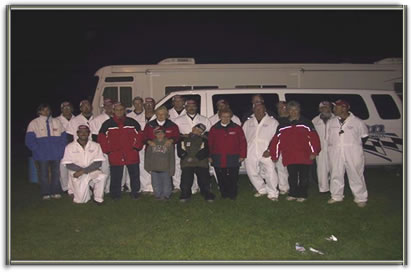